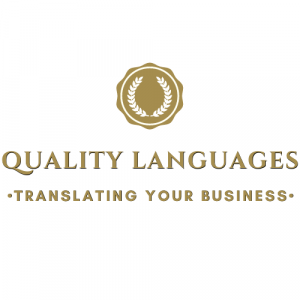 If you speak the language, why use a translator?

We often attend professional events hosted by the Spanish Chamber of Commerce in the UK, where almost all the guests are fluent in at least both English and Spanish. Many of them also speak additional third and fourth languages.

Due to the commercial nature of the events, they are either Spanish-speakers using English while working here in the UK, or English-speaking, working for Spanish-owned companies, using Spanish to communicate with their colleagues and customer base.

This, of course, raises the question of just how necessary is a translation and language-consulting agency like ours in such multilingual company?

If you’re fluent, why hire a language specialist for translations?

When a professional is fluent in both languages being used in the business (in this example, Spanish and English), the obvious point is that they have the advantage of being able to function effectively in both.

Assuming that their level of fluency is high, they don’t need an interpreter to be present for meetings or on telephone calls and they don’t need emails or documents to be translated in order to be understood. You might, logically, conclude that it saves time and money for the company and the end client for that employee to deal with all bilingual matters. That can certainly be true but, what do we mean by fluent?

One of the contacts we have made through the Chamber of Commerce – let’s call her Ana – was born in a non-English speaking country and has spent years studying and honing her expertise in the financial sector in the UK. She has numerous qualifications and is highly recommended by her peers and clients. Presumably then, she is the ideal person for her company to use if it needs anything translated for her department.

In fact, Ana has admitted that when she speaks to her family abroad, finds herself lost for the right words to describe her own career and daily activities. Having pursued a successful career in English, she does not actually know the equivalencies in her own original language.

Clearly, although Ana is fluent in both languages, she is not quite “fluent” in the relevant industry vocabulary in her own language. She couldn’t be expected to produce an accurate translation for her department, even though she is a subject expert and a native speaker.

When we pass a piece of work to a bilingual employee then, we need to know just what advantage we expect their fluency to offer.

Another contact we made – we’ll call this one Andrew – spoke to us in beautifully fluent English and Spanish and with deep knowledge about his particular industry. However, when he wrote to us the next day to exchange pleasantries, his email had a number of spelling and grammar mistakes and did not follow the accepted norms for setting out mails.

Since we are a language agency, our antennae are obviously particularly highly tuned to detect such issues and others would potentially either not notice or not care, but it does raise the question of language fluency versus writing fluency, and how much that matters in each of our businesses.

What is your desired result?

Which leads us to examine the desired outcome of whatever business action we are asking our bilingual employees to perform or, indeed, what actions we are performing ourselves as bilingual professionals.

In other words, why does all of this matter?

We’ve written elsewhere that knowing why you want to translate something affects whether you should translate it. It also influences your decision as to who translates it: you or a professional translator? Consider these examples:

If, like Andrew, you simply need to communicate with a colleague or client and create good will by doing so in their own language, fantastic! The benefits of being bilingual far outweigh any potential downside to not being a stickler for grammar. Likewise any communications where formality is not an issue. His obvious subject expertise and language fluency are a huge bonus and should of course be maximised

If you’re the person drafting the document in the first place, and you can do so in either language to an equal standard, it stands to reason that you don’t necessarily need a translator. However, if you’ve been asked to translate an existing document, do you have the training and ability to draft it exactly as the original intended, without missing any nuance? If not, it is probably time to hire a trained professional to do the job.

Marketing texts or tenders often have whole teams to draft them and should have the same attention and expertise afforded them in the translation as the original. It might be a good idea to hire a professional to either collaborate on a translation or take over that side of the project to mitigate any possible gaffes. Even seemingly innocuous mistakes such as misplaced commas or capital letters can be costly, particularly in a fast-paced environment where we are likely to delete an email or cancel a pop-up if it looks like spam.

How important is speed?

In the above examples, even if you could efficiently draft two accurate documents in each language, or translate someone else’s work, it is important to consider how long it might take you and whether it might be worth hiring a professional, who could do it in much less time.

You’re probably not being paid specifically to create translations, but to work on your own tasks as a priority (where having a document in another language is a peripheral detail).

If you are about to embark on translating something or asking a colleague to do the same, take a moment to assess whether there is a risk of you either rushing the job so you can move on, or taking too long, as it was trickier than you expected? Returning to the earlier question of why are you translating it, what is the potential impact if you make a mistake?

Qualified translators have honed their skills through years of training and development, in the same way as you have developed your own professional career. Like you, they will be an expert in the subject but, in addition, they should also be an expert in the actual act of translating and copywriting. Not only will they inevitably be much faster at the task, but they will also use specific software to enhance their work, which again speeds up their process and ensures accuracy.

Ultimately the question is, how much value do you add by doing a translation yourself? Will you be using your time and skills wisely and effectively or could you be better used elsewhere?

Clearly there are many times when being bilingual is a huge asset and there is no need for an external party. For the times when you do need a professional though, we have found that the key to success is collaboration: collaborate with a professional and add value, while still remaining effective in your own role.

Collaborate with a professional translator

You are a subject expert with significant relevant language knowledge and we are translation experts. You are ideally placed to provide glossaries and specific insight into the project and you can quality check and proofread the final piece, while still having the time to achieve your usual tasks. We can produce the text in accordance with your requirements and allow you to finish on time and within budget, to achieve the impact you need from the work.

Together, we can produce effective projects that get the results you need. 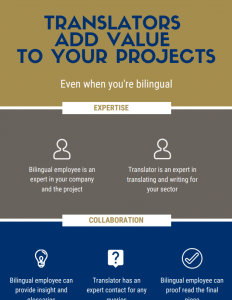 Print it out or share it with others and let us know what you think.